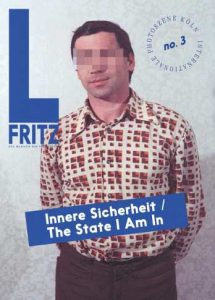 Extracts from 4 articles. The first:

The Fleck, by Julius Tambornino

There it lay, atop a skip outside the Academy of Fine Arts in Leipzig – discarded, but carefully folded –, the GDR flag to which Günter Karl Bose devoted an almost drastically monothematic book with The Fleck. Painstakingly, his camera leads us down into it in three paths, along the flag’s details – at no point in the book does the whole become visible. That such an objectophilic gaze as a book-project concept does not fall on its own monotony, but is able to engross from the first page to the last, is due also to the object’s specificity: Against the background of the history and function of this flag of failed GDR socialism, every fold, every snag, every pale fleck and every torn hook develops at first, on leafing through, a transferable sense – and becomes a symbol of the downfall of a state, its promises and our fading recollection of it. Bose has framed the visual sequence with two texts, which seem wilfully to counteract any exaltation of the object. For one thing, there is the short, perfectly non-pithy anecdote about the flag’s finding and an encounter with the janitor at the time.

For another thing, Ernst Jandl’s macaronic poem and what is to be done with it questions the purpose of such national symbols.  “(Let’s) throw it, / werfen / into a dreck / that’s / a zweck” the poem says, after all. At the Academy of Fine Arts, this demand, after some delay, had apparently been complied with – before Günter Karl Bose came past the container at just the right moment.