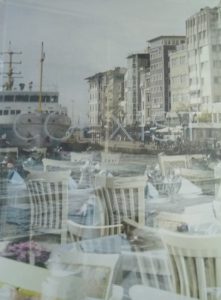 Following a read-through of my copy, it turns out that Linguistic Landscape by Jannis Androutopoulos is my favourite (it reflects my interest in signs, linguistics and Roland Barthes), so, disregarding order of appearance, I’ll reproduce this one here first: Franziska Stünkel Coexist

The bicycle trail on my way to work leads me past a former factory compound, which is being rededicated for residential development. The old warning signs—in white enamel, with black Gothic type—have now given way to info panels by the urban development authority. My cycle path continues on past an imposing school building in dark Hamburg clinker. Above the two portals we see cast-iron inscriptions: the one on the left reads, “Mädchen” (Girls), the one on the right, “Knaben” (Boys). Next to the gates hang the new sheet-metal signs bearing the name and the colorfully lettered motto of today’s local school. I pedal on through the small park with its painted-over info showcases and reach the shopping street in the heart of my neighborhood. A kebab eatery with the creative name “Eatstanbul” is located here, between the long-established “ex libris” bookstore and the “Pastelaria Carlos” with the national colors of Portugal on its sign.

These are examples of the coexistence of signs in the city from the viewpoint of a linguist. Signs in the city are the subject* of “linguistic landscape” research, a subfield of linguistics that works with photography. Here I’m currently involved in  a project by the name of “LinguaSnappHamburg”, and Franziska Stünkel’s work offers me an opportunity to reflect upon the parallel paths of science and art and their different styles of reading the urban landscape. Franziska Stünkel

I am fascinated, time and time again, by how science and art devote themselves to similar phenomena and interpret them, each drawing on its own logic and expressive forms. For photographers and linguists alike, cities are a source of common inspiration. They juxtapose incongruous elements and enable conglomerates of people, goods, practices, and lifestyles, out of which unexpected alliances and coherences may emerge. Viewed this way, coexistence—the concurrency, concatenation, and confusion of differences—is an essential trait of the urban. Some of the cities Franziska Stünkel documents are the same ones we work on in linguistic landscape research. On a base level, which concerns the nexus of space, body, and technology, even our methods are alike**: We walk through the city and take photographs of it. In our research, we photograph street signs, stickers, and graffiti, and analyze them in terms of how language constructs social space and indexes societal diversity in the city.

It has been the humanities’ assumption at least since Roland Barthes that any text needs to have a reader in order to mean something. One and the same book can yield wholly different associations, depending on what prior knowledge is brought to bear on its reading. Artistic photography and linguistics attempt to read the city as one endless dynamic book. We perhaps look at the same thing, but what we see as we do so arises only through a specifically trained perception, which lends interpretative coherence to observations that might otherwise appear chaotic and meaningless. Franziska Stünkel Coexist

In Franziska Stünkel’s photographic art, coexistence—at first glance paradoxically, I find—arises through an inverted perspective. The gaze through the glass façade first disrupts the customary direction of perception, then resumes it in fragments. This produces an association of perspectives and elements, which puzzles initially, and then fascinates. In linguistic landscape research, a sense of coexistence is constructed as we learn to reduce the staggering diversity of the sensory input that we encounter while walking through the urban space and read the city through its visible language first. Not in the figurative sense of a language of architecture, but in the very specific sense of linguistic signs, which are a prerequisite for the built urban space to become a social one. Based on methods of our discipline, we decipher the conglomerate of signs in a second-order reading, in which we attempt to figure out*** how people “read” the city in order to act within it.

From a linguist’s viewpoint, coexistence has first of all to do with linguistic diversity. We interpret the parallel and simultaneous presence of different languages—quite a prominent feature in some of Franziska’s photos—as an indicator of the groups that populate the urban space or have shaped it in the past. A city characterized by transnational mobility, such as Hamburg, is replete**** with linguistic diversity. The examples mentioned at the beginning are no exception here, but normality. What distinguishes various Hamburg districts from one another is not that some are entirely monolingual, but rather the varying proportions of different languages in the landscape.

On a second level, coexistence arises through the various functions of visual language in space. Street signs guide us through space, regulate our conduct, draw our attention to goods and services, and recall histories of the place. Our term for where signs having different functions stand alongside one another is “ensembles”. Such ensembles are exactly where the materiality of signs unfolds its significance. Their making indicates their power, their historicity, and their contribution toward ordering the public space.

Finally, coexistence reveals itself in the “layering” of symbols in space. Signs, graffiti, and stickers replace one another as time passes, and they supersede one another still more frequently in day-to-day power struggles. Signs get painted over, glued over, torn apart*****. In my project we recently documented how soccer fans in Hamburg’s Kiez glue their own stickers over those of the opposing soccer team. They do it in such a manner that the sticker underneath remains recognizable. This, too, is coexistence: a dialogic power-play, conducted with stickers on the walls of the city.

Square brackets indicate my text prior to copy editor’s changes

[*object]
[**our methods are even alike, originally – that reflected the German and its emphasis as I had it in front of me]
[***glean]
[****shot through]
[*****and blemished – verunstaltet – which isn’t ‘torn apart’! (‘torn’ on its own might have been a more natural choice, if the change was really felt to be necessary)]

Some of the preface to COEXIST, by Karin Rehn-Kaufmann, follows via the poppy below: