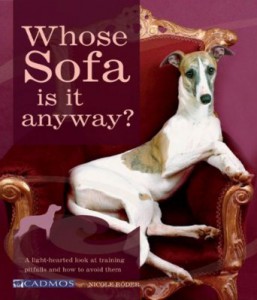 Tramp jumps up at a stranger for the first time in his life.

As Mr. Jones is strolling in the countryside with his Tramp, who is off the lead as usual, and letting his thoughts wander, Tramp is off somewhere with his head stuck in a mouse-hole. Unmoved, Mr. Jones continues on his way because there are no problems with Tramp. He won’t run up to walkers, won’t bother any joggers, and he totally ignores strange dogs – as the two-legged half of this relationship, then, Mr. Jones hasn’t the slightest need to worry and is therefore able to really enjoy his walks.

Mr. Jones even rather pities people who have to call their quadruped every time something on two or four legs pops up on the horizon because they’ll need to put their dog on the lead. Walks like those must be the opposite of relaxing, he thinks to himself. While he is still abandoned to his thoughts, which are located somewhere between the urgent things that are still on the shopping list and the hope that he may just perhaps have picked the right lottery numbers this time, his Tramp races past him, full of joie de vivre. To wit, he has just had to acknowledge the fact that mouse-holes are only a perfidious plan on the part of small rodents to make his life difficult. There never is a mouse lurking in the hole that he has just dug out.

At this moment, as Mr. Jones is thinking with a misty-eyed smile on his face, “Dogs will be dogs,” a blood-curling scream rings out and a woman dressed in light beige is hurling verbal daggers at poor Tramp, who is himself running about her, joyfully wagging his tail and preparing for a verbal counter-attack in his turn. Mr. Jones immediately notices the many little paw-prints adorning the lady’s formerly light-coloured trousers. And now things really get going:

As Mr. Jones is being scolded by the lady, he can only stammer bewilderedly, “Tramp’s never done that before though. I don’t know why he’s done it today…..” You can probably guess the rest of the story.