From Near to Far, by Sonia Voss

From French into English. 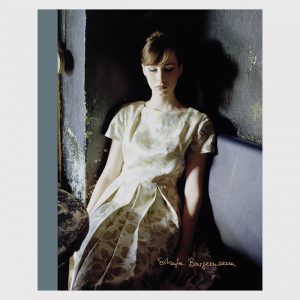 Midnight blue walls, dress the color of light. Seated in the corner of a room, illuminated by the half-light of a window,* off-camera to the left, a woman traces the diagonal of the frame. Her arms extended the length of her body, the folds of her skirt** spread carefully in front of her, she is tipped back on a bench, photographed slightly from above, delivered up to the lens. Her eyes are closed: one sees only their graceful design, large black accents, shadowed lids. Made ready, she thus shrinks from our gaze. Offered up, she seduces us and simultaneously resists us.*** From the interior world in which she has taken refuge, we get to know nothing****. The deepest thing in man, Paul Valéry wrote, is the skin.

Fashion models, actresses, writers, young children in disguise, demoiselles from balls and fairs: women are omnipresent in the photographic oeuvre of Sibylle Bergemann. Tipped back in ecstasy, captured in the act of leaving, or facing the camera, fixing on us an appraising or piercing gaze—we cannot tell—they state their personalities with authority and melancholy. Neither hazy nor dominating, they are anchored to the floor, while at the same time being constantly on the verge of breaking away, wavering between two spaces like angels, those creatures who draw a link between the physical and immaterial worlds and form one of the photographer’s leitmotifs.

Sibylle Bergemann was born in Berlin in 1941, in the middle of the war and the bombings that were then striking the German capital. Following a childhood spent outside the city, she returned in order to pursue commercial training, then worked there on the editorial team of the East German cultural journal Das Magazin. She approached photography through regular visits to the ilustrations department before deciding, in 1966, to train under Arno Fischer. Fourteen years her senior, Fischer was a major postwar photographer and a renowned teacher.

It was in the context of a divided city (the Berlin Wall was built in 1961) that the photographer’s career began. Very soon committed to a shared vision, Sibylle Bergemann and Arno Fischer formed from 1966 onwards, together with four other photographers, the working group Direkt, an informal platform for reflecting on the role of press photography, which met a need to join forces in a professional context that still largely lacked structure. Teacher and pupil became husband and wife. The couple they formed, the memory of which retains a powerful aura to this day, was to become the beating heart of the East German photographic scene. Through it, one could recount a whole sweep of cultural history in the GDR, with, as the first backdrop, the abandoned castle of Hoppenrade, near Rostock, to the north of Berlin. This building of past splendor housed the village’s “Konsum”, a state-run store where residents got their supplies, as well as some rooms on the second floor, which were rented to the couple for a few dozen East German marks. For six summers, artists, intellectuals, fashion models, brought along by their guests, multiplied sleepless nights and costume parties, reinventing—far from the city and inquisitive gazes—a dolce vita that was barely imaginable in the austere GDR. This bohemian spirit extended to their Berlin apartment on Schiffbauerdamm, located a stone’s throw from the famous Bertolt Brecht theater on the bank of the Spree. Despite an oppressive neighborhood—from the windows, one could observe the river patrols of the border guards*****, as well as the Friedrichstrasse train station, where families, reunited for the day, separated each evening before the stroke of midnight—they continued to welcome colleagues, friends, and students on a regular basis. It was also the obligatory calling point of foreign photographers paying a visit to East Berlin, who discovered there a community keen for debates: Henri Cartier-Bresson, Josef Koudelka, Robert Doisneau, Robert Frank, Rene Burri are so many encounters enabled by this exceptional space of freedom, set apart from the world.

*Misplaced comma. The window is off-camera to the left – not the woman, but that is what the comma implies! This error is not mine. The first Word document I submitted contains the formulation:

Seated in the corner of a room, illuminated by the half-light of a window left off-camera, a woman traces the diagonal of the frame.

The copy editor apparently misunderstood the meaning of the word “left” (it is in fact intended to mean that the window *remains* off-camera — I could have formulated this more effectively), and made the change that went to print. Unfortunately, I did not spot the change when the document came back to me.

**I had translated – accurately – “dress”. Changed by the copy editor. She is indeed wearing a dress!

***I had written “she seduces us and resists us simultaneously”.

**** I had written at this point: “From the interior and superior world in which she has taken refuge, only mystery gets through to us.” This was an accurate translation of: “Du monde intérieur et supérieur dans lequel elle s’est retranchée, seule l’énigme nous parvient.” The copy editor made the printed change – which would be better (if it has to exist at all) as “Of the interior world in which she has taken refuge, we get to know nothing.” Despite my inserted Word comment explaining “seule l’enigme nous parvient” — parvenir; mystery “gets through” to us –, the change was still made.