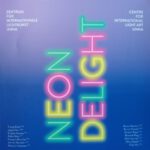 Neon International Light Art
Neon is the sixth most commonly occurring chemical element in our solar system. The inert gas is abbreviated in the periodic table using the symbol ‘Ne’. Discovered in 1898 by the chemists William Ramsay and Morris William Travers, just a few years later, in 1912, it was deployed for the first time in the illuminated advertisement of a Parisian hair salon. From ‘Palais Coiffeur’ on the Boulevard Montmartre via a ‘CINZANO’ blown in big block capitals on the Avenue des Champs Élysées, the notion of using neon for promotional purposes spread beyond Paris and throughout the world. Neon International Light Art

When an artistic and cultural dynamic set in during the USA’s ‘Roaring Twenties’, neon advertisements began lighting up the urban nights in New York City as well and in other of the world’s metropolises, clearly signposting their pulsating nightlife. In the midst of an industrial boom, mass production allowed access to technologies for a broader section of the population. The car took on a central role in the life of the working and middle class, radio became a mass medium, and movies became popular too. Hollywood kindled the desire for an adventurous and pleasurable life.

Neon signs reflected this longing in the urban profile; they became a permanently visible expression of this trend and went on to become symbols of economic advancement and a modern society that was discovering a new outlook on life in post-war nocturnal culture. Not even the global economic crisis could halt the spread of neon advertisements; they were affordable and yet radiated an elegance that lent expression to hope of a new economic upturn. In 1934, more than 20,000 neon systems were installed in New York City alone.

The story of (widespread) neon light in the city is intense, but soon comes to an end. During the city blackouts of the Second World War, neon signs stayed off at night-time too, which deprived them of their intrinsically strong presence. Well by the time acrylic light boxes with foil lettering came along to replace neon tubes, the latter had become a symbol of decline. Businesses that were still drawing attention to themselves using neon in their windows were doing so mainly because they could not afford the newer technology.
Neon Delight Centre for International Light Art
Literature, theatre, cinema, and music gave rise to numerous works and plays that featured ‘neon’ in their titles as an allegory for decline and decay. Often, they told of individual urban destinies and dealt with the harsh neon-lit life amid alcohol, prostitution, gambling, and criminality.
Neon Delight at the Centre for International Light Art
Not digressing far from this theme, Las Vegas represented a special case regarding the trend to replace neon systems. There, neon tubes were retained for the time being and became part of the city’s particular identity. As the sun went down, the buildings vanished behind the signs, and from that moment on the signs were self-referential rather than references to events indoors. Las Vegas became a model location of popular culture and the postmodern. The likes of Joan Didion, Hunter S. Thompson, or Tom Wolfe drew their inspiration from the city and watched as the sequence-switched, frantically flashing neon-light sea of the Las Vegas strip assumed its place alongside Vietnam War, protest culture, and Pop Art in the pictures of this hectic era. Yet even in Las Vegas, the dominance of the neon tube faded with the outgoing millennium. Today the city is home to a cemetery of old neon elements, the Neon Museum, in which numerous important pieces of Las Vegas history have found their final resting place.

Click on the poppy for more from the exhibition in Unna: