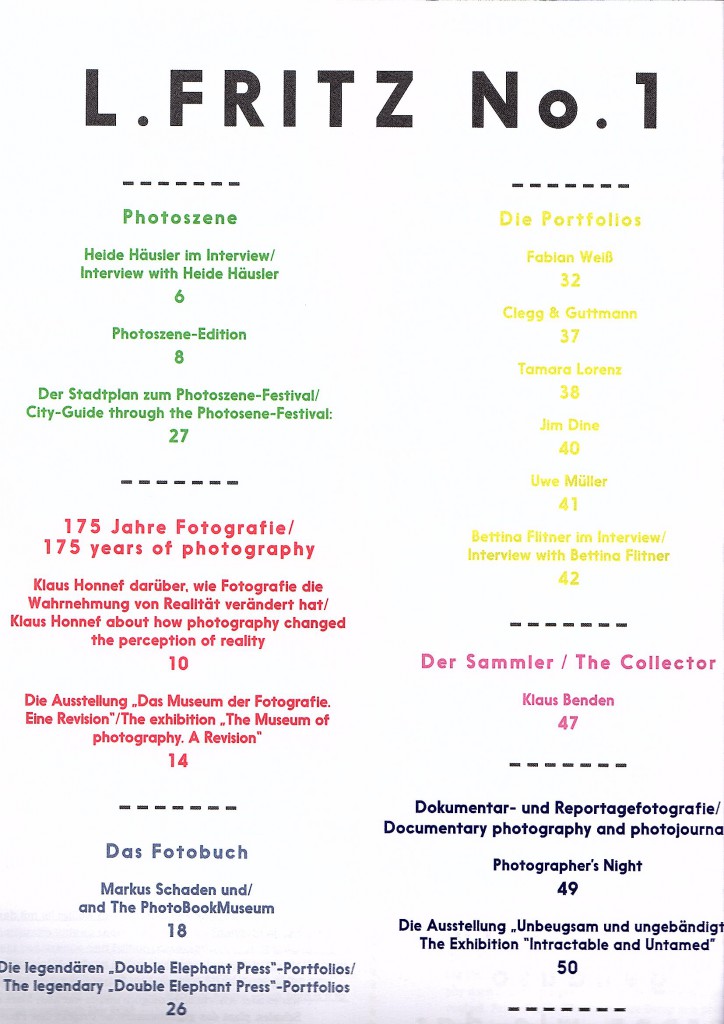 The first three paragraphs of the Editorial by Damian Zimmermann, with Heide Häusler, Inga Schneider and Nadine Preiß

We thought about it a long while. Can you call a magazine “L. Fritz”? Probably not. But we’re doing it anyway. For L. Fritz is not just any magazine: L. Fritz is THE magazine of Photoszene Köln. It was obvious to name it after the man who did so much for photography in this city and far beyond like almost no other: L. Fritz Gruber (see box).

Carrying his name so aggressively before us, however, is not only meant to be a homage, but also an obligation: We see it as our task to promote photography in Cologne and beyond. If Photoszene is the platform for photography, L. Fritz is this platform’s echo sounder, ambassador and advertiser. For this reason the bilingual magazine is also being distributed for free at all the major photography locations. In Cologne and throughout Europe.

With L. Fritz we intend to inform, entertain and challenge our readers. At the same time L. Fritz is addressed to all who are interested in the medium of photography itself.

Hello from the Senior Mayor of Cologne, Jürgen Roters

Photography turns 175 this year. Even in the medium’s infancy Cologne was home to one of photography’s pioneers: August Sander. The tradition of outstanding artists of photography is prominent in Cologne to this day, just think of the unique Chargesheimer and the great L. Fritz Gruber, who was not only a remarkable photographer, but also an ambassador of photography and a renowned networker.

For many years, all institutions and initiatives that are dedicated to the medium of photography in Cologne have been joining forces every two years to put on a big photography festival. “Internationale Photoszene Köln” established the reputation of the City of Cologne as a natural city of photography.

In 2014, under a new artistic team of directors and with a new design, the Photoszene festival is taking the stage with the aim of making the photo scene more international, more artistic and more communicative, as well as of setting dialogue on and with photography on a continuous plane. The template for the idea of actively using photography again as a means of promoting Cologne likewise originates from L. Fritz Gruber.

The bilingual magazine L.Fritz is an important editorial and critical tool with which Photoszene takes a curatorial approach to the multitude of photo exhibitions in Cologne. Thus, the magazine – following the lead of the man himself, L. Fritz Gruber – is set to become an ambassador for photography in and from Cologne.

I would like to extend my sincere congratulations to the new Photoszene team on the first issue of L.Fritz. I wish the Photoszene Festival much success and am already looking forward to many outstanding photography exhibitions in the autumn in Cologne.

175 years of Photography. Klaus Honnef about how photography changed the perception of reality (translation starts on page 11)

They look like scoundrels and good-for-nothings. They wear the faces of daylight-shunning rabble. The dishonest gazes advise caution to those who step nearer. Figures like them populate the sociocritical novels of Charles Dickens and Émile Zola. Their clothing is nonetheless select. The best fabrics. Silk and satin. They are adorned with splendid orders in gold and precious stone. Yet it is not the heads of a criminal-class family who have gathered before the easel of painter Francisco Goya, but the royal family of Spain.

The first impression never deceives. Everything we know tells us that the shady types from US soap operas like “Dallas” or “Dynasty” look like choirboys, by the standards of Spanish King Ferdinand VII and his Bourbon court. Obviously, Goya had the gift of an accurate eye, capable of seeing through the pompous gloss of courtly ceremony and cutting through its bogusness. This may have been so. Goya’s sharp “realism” has therefore been rightly frequently emphasized and celebrated in literature.

However, I would like to place a fat question mark against whether the optical reproduction of the royal family was intended to be as crass and unmasking as it seems to us from the current perspective. For it is fairly unlikely that the high rulers had no objections to being portrayed as rogues and “shit in silk stockings”, as the Bishop of Autun and long-serving French foreign minister Talleyrand put it. The Spanish aristocrats were not blind, and the painter’s extraordinary artistic skill would have been no help to him in saving his neck. Rather, I assume, they would have handed over their esteemed court painter to the garrotte without further ado if such an intention had been obvious to them. There is much in favour of the assumption that they were satisfied with their pictures by Goya’s hand, even that their self-image barely differed from these, particularly as the portraits of the ruling family were of a prestigious nature. Not the least of the pictures’ tasks was to impress them and people like them.

Without plunging all too deeply into the historical relations of the Spanish monarchy at the beginning of the 19th century – this example demonstrates that we view pictures from earlier periods, even when they appear in a pictorial scheme that is largely familiar to us, through different eyes than their contemporaries did. I mean this not so much in the natural, physiological sense, but in the sense that our perception is trained in a completely different way to the perception of those to whom the pictures were addressed at the time. That, in other words, not only are modes of representation subject to historical change, but, to an equal extent, modes of visual experience are as well. Which means, to put it exaggeratedly, that we do not see what we see, but what we know.

For at least six generations, pictures by the medium of photography – analogue and digital – have been drafting our image of the visible empirical world. They shape the way we view the world just as much as our relationship to it and, no less, our relationship to ourselves. The consequences that arise from this are the object of countless treatises, but these lose themselves in the realm of scientific speculation. At the same time, we must not blank out the other models for encountering the empirical world and one’s own Self, as devised by the sciences of psychology and history. Both of these, by the way, like photography, are children of the 19th century. A psychologically motivated interpretation of his portraits, then, would have been just as incomprehensible to Ferdinand and consorts as a criminologically-tinted view.

The face of Ferdinand VII was known only to the inner circle of the court and to the courts of the principalities with which Spain had contact. Most representatives of our era’s ruling class are housemates and more familiar than the vast majority of our relatives.

Also, the medium of photography and modern democracy grew up together. Along the way photography has intervened more and more enduringly in our relationship to politics and gradually shifted politics into the realm of show business. German President Ebert suffered an unwitting blow to his robust reputation when the “Berliner Illustrirte” featured him on a cover in his swimming trunks. Russian President Putin draws his popularity from similar photographs, as did a young US president decades before him. And, during every election campaign, we are grinned at by the ageless fake faces of those courting our electoral favour. Photographic glamour has usurped their faces; the first step on the way to credibility loss.