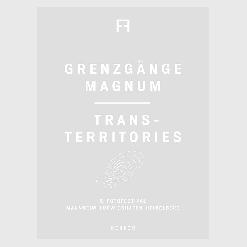 Word of Welcome, Preface, Introduction, chapter introductions and the bulk of the contents translated into English by Alexandra Cox (click to enlarge):

“(…) at last I could set off (…) The first town is Hard, near Bregenz. Huge skeletons of barns – no walls, but hay. German prisoners of war sitting around everywhere, then huts with primitive cooking facilities, all enclosed in barbed wire and watchtowers with sentries holding machine guns. I call out ‘bonjour’, the soldier approaches me. Cigarettes are not enough for him. Whether I may enter the camp? ‘Non’, I have to speak to the commander first, and apparently he is not here. Upon which I cycle on down the busy street past the first large hut camps of the French, with huge hoardings: the propaganda of the liberators. Houses shot to pieces, enormous numbers of people in shabby clothes looking or waiting for something. They sit for hours on their bundles, their few possessions, staring straight ahead.”

“I was accredited as a photographer in Berlin and in the summer of 1961, you know, there was a huge influx of refugees; we were quick to react. We were used to constantly having to get ‘permits’ of one sort or another and things, I got myself a photo permit for the refugee camp as well and drove there in July 1961. It was known that the people there were afraid of being photographed, scared that it could be dangerous for them or their families, but I was able to move freely around the camp and I wasn’t all that conspicuous with my little Leica.”

“(…) In the spring of 1973 my wife  [Eva Windmöller] was accredited as a Stern correspondent and I received my credentials as a ‘technical assistant’  at the Ministry for Foreign Affairs of the GDR. We were given press IDs and a flat in the Berlin-Weißensee prefabricated building complex. (…)

Life on the 18th floor of the prefab – there really was such a thing! – was great familiarization. The elevator was often broken. The heating could not be switched off even in high summer; the construction noise and waste gases from nearby factories were unbearable.‘The GDR’, Dresden writer Volker Braun said, ‘is the world’s most boring state.’ I often felt that way when I walked with my cameras through bleak streets that showed no signs of life. There were days I didn’t take a single picture. That it was only possible to put up with the GDR with caustic humour was a fact we soon learned from artists and photographers, who were anything but boring.  The many, very long evenings with photographer colleagues over Radeburger beer and vodka are unforgettable:  Arno Fischer, his wife Sibylle Bergemann, Ludwig Schirmer, his daughter Ute and her husband Werner Mahler, and Roger Melis. I learned a great deal from them, not only about ambiguous daily life in the GDR, but also about truth and honesty in photography.”

In the central space of the exhibition No Place like Home / Zuhause at the Wilhelm-Hack-Museum, the sculptor Veronika Veit has built an installation made out of cupboards that is reminiscent of a barricade of wagons. Invited to partake in a dialogue with the Magnum photographers by the curator Andréa Holzherr, she has suspended the physical structure of a home between the concrete pillars of the museum space.

In the cupboards, between the doors and drawers, objects push and shove, the inhabitants’ belongings jostle and interweave. Order is brought into these cupboards; in these compartments, the world is arranged. In striking contrast to the two-dimensional films of photography, in this context form spills over into space.

Veronika Veit’s installation accentuates essential aspects of the private place of retreat. The cupboard symbolizes the private sphere; in it, the personal is safeguarded from the incursions of a public realm.

Two video works, shown on monitors on the shelves, transpose this fundamental aspect of the protective space onto the human: One work shows the chest of a woman clad in a woollen pullover on which the stitches continuously come undone and apparently re-form. The monitor itself, sheathed in a cocoon of wool, underscores the character of the zone worthy of protection, the private refuge. The other video work shows a woman who applies makeup not to herself, but to her reflection. Protection, prudery and prettiness. This triad of signification applies not only to people’s clothes (and makeup), but also to the architectural concept of a dwelling.

With the work’s title, Zufall und Gelegenheit (Chance and Opportunity), another plane of signification is laid upon the scenic installation, depriving the safe hideout of stability. Chance denotes the uncontrollable, the unpredictable. Opportunity starts from a set structure, a predictability, a possibility to construct. In the interplay of chance and opportunity a tense force field is created which, in the exhibition No Place like Home / Zuhause, both underlines the fragility of a place of retreat and also allows us to recognize that, in the end, this tense interplay is a fundamental prerequisite for the creation of art.

Cells in Psychiatry. Looking In, Looking Out, by Thomas Röske, Sammlung Prinzhorn (page 212)

Even in around 1900, not only the unconscious came to be expressed in artistic works by the inmates of institutions, as Hans Prinzhorn asserted in his 1922 book Bildnerei der Geisteskranken (Artistry of the Mentally Ill). Equally, these men and women took up moments of their previous lives or reflected their situation as sectioned psychiatric patients. Therefore, cells were repeatedly turned into a theme, often reduced to a barred window that signifies forced exclusion from the community and the restriction of liberty. Sad portraits alongside illustrate the resultant suffering of those affected; anachronistic chains symbolize the felt harshness of the incarceration. Marie Lieb (life dates unknown) acted against institutional constraint in 1894 by laying evocative patterns comprising strips of institution linen on the floor of her living space, thereby appropriating this space for herself. A similar enterprise was undertaken by Hermann Paterna (born in 1870, last mentioned in 1906) with newspaper clippings, which he stuck on the wall to form a house-shaped composition. That the act of locking up did not help people with their actual problems is shown by Jakob Mohr (born in 1884, last mentioned in 1935) in around 1910, with a scene in which an aggressor has rays penetrate the wall of his cell.

In addition to looks inside, there are gazes outward. In 1916/17 Wilhelm Müller (life dates unknown) recorded in numerous watercolours, most of them on toilet paper, the numerous seasonal changes he observed from a window of the institution on the Domjüch lake – a manifesto against the isolation of institutional daily life. This isolation was also testified to by the former weaver Gustav Sievers (1865–1941), who lived in Göttingen’s asylum on account of child abuse from 1909, with his 100-fold drawing of a small view of the “correctional institution” opposite his cell.

After the war, Sieversʼ view outside was also that of Julius Klingebiel (1904–1965). The locksmith with a tendency towards violent outbursts, an inmate of the Göttingen institution from 1939, was accommodated in a neighbouring cell at the asylum from 1950. Over the next ten years he painted the walls of his just 9.25 square metre cell almost completely with a multitude of framed and unframed image fields, thereby overwriting the walls’ delimiting function. In our exhibition, an almost original-scale, walk-in reproduction gives an impression of the overwhelming abundance of painted people, animals, vehicles, buildings, machines, decorations and symbols. In relation to the room, the initially arbitrary-seeming compositions make sense. For instance, the emphasis of the big walls lies near the window, because the most light comes in here, while on both sides pictures of a few women, titled by Klingebiel his “whores”, have remained – probably intentionally – in the half-dark. The asymmetrical structure of the ornamental painting of the wall around window and door is also reflected across the room. Above the door, though, is the image of the Redeemer, with its frame open at the bottom, in order to give expression to the hope of maybe one day leaving the institutional cell.

The dominant motif of the paintings are stags with antlers protruding in an often hypertrophic manner, which are in contest with the boughs of some trees. The biggest animal group, near the window, is a family comprising stag, hind and fawn; the animals bear human traits. Possibly, Klingebiel’s concern to exaggerate the male attribute was an attempt to emphasize his own virility by way of compensation; after all, he had been sterilized during the Nazi period and deserted by wife and child. On the opposite wall an immense symmetrical round shape, recalling a cogwheel or a ship’s wheel, unites its own unique cosmos of figures and symbols. It is easy to imagine Klingebiel navigating visitors through the varied pattern, the contents of which largely remain puzzling today. In the centre of this shape, too, the Redeemer again emerges. Without a doubt, exclusion from society dominated the thoughts of this institution inmate exactly as much as those of the other men and women presented here.