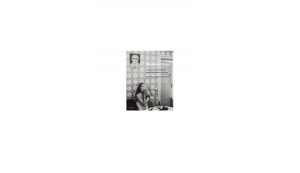 The beginning of the catalogue introduction by Dr. Brigitte Franzen:

The present collection of East German photography opens up a brief look back at the historical background of 1945. After the end of the Second World War and the collapse of the so-called Third Reich, Germany was subdivided into four zones of occupation: the American, British and French zone in the west, and the Soviet zone in the east of the country. Berlin, too – although located in the middle of the Russian-controlled zone – was divided into four separate sectors. The Berlin Blockade of 1948/49 marked the Soviet Union’s attempt to change Berlin’s status in its favor. In response to that the western Allies supplied the city’s 2 million inhabitants via the “Air Lift.” May 1949 saw the end of the blockade. Germany’s division into a western democracy and a Soviet satellite state in the east was now unstoppable: the two Germanys, the Federal Republic of Germany in the west and the German Democratic Republic in the east, were founded at the end of 1949.

Work began on the building of the Wall on the GDR side on August 13 1961. With this measure the “Cold War” became properly visible to the world and the separation of the two German states was cemented. It was not until the East Germans’ civil revolution in 1988/89 that there was any fundamental change in the situation, leading on November 9 1989 to the fall of the Wall in Berlin and, on October 3 1990 – 20 years ago, now – to reunification under the drafting of Germany’s constitution.

From the beginning, images were dealt with extremely differently in the two German states. While the constitution in the FRG guaranteed art’s freedom and independence from the state, in the GDR the arts were used as instruments to assert socialist and communist ideals. Art in Germany found itself, in the west, confronted with new freedom under “free market” conditions and, in the east, with a continuation of its political utilization: under “anti-fascist,” on the one hand, and under socialist auspices on the other. Whereas, in the west, the attempt was made to connect with the modern and with abstract art, in the east the credo of Stalinist “socialist realism” was proclaimed.

In the GDR, photography was defined as an “ideological weapon”, as an instrument of the “class war” with unequivocally educational tasks and an inflammatory mission. It was during a time of strict art policy regulation – which was to become even stricter after the building of the Wall in 1961 – that the exhibition “The Family of Man,” put together and sent out on tour by the Museum of Modern Art in New York, was shown in 1955 in West Berlin.

The beginning of the contribution by Ditmar Schädel:

Between Individuality and State Restriction

The Sammlung Gabriele Koenig is not only a collection of photos comprising exhibits from the former GDR. The collector’s manifest interest in photographic specificities and her concentration on the photographic image are palpable from the very first glance. At the same time, it is not historical classification or direction of style that are crucial for the collection’s structure. The grouping and presentation of photographic works from 40 years of GDR is therefore not performed chronologically or in order of authors either, but is based on topically approached tableaus.

The collector’s flair for selecting GDR photography is evident here; however, through this, the specificities of photographic approaches in the former socialist part of Germany are also revealed.

Like any other art form, it is precisely during times of societal upheaval that photography has always found a new role for itself and developed corresponding forms. In the years after the First World War, greater openness and tolerance were also characterized through photographs of the naked body. Be it in the form of snapshots of the hikers’ movement, nudism, images from dance and theatre or even private photographs, the trend for thematizing the naked body also as a synonym for individual freedom and self-determination became apparent.

Just such trends can be observed in the 70s of the last century. ‘Streakers’ in cities – time-wise, a very limited phenomenon – the more pronounced presence of naked skin in magazines and periodicals but also in the movies, are representative of an increasing physicality. Occasionally, these body images were deployed with the educational in mind and the freeing from sexual restrictions; on the other hand, though, were also increasingly used as erotic or pre-pornographic stimuli. The debate enduring to this day from feminist perspectives, surrounding women’s reduction to objects as a result of such images, is a clear demonstration of the spectrum and controversy in dealing with nude photography.

In the former GDR, a different way of dealing with nakedness and sexuality, but also a different societal position held by woman, certainly leads to aspects of nude photography which are not so palpable in the west. Its liberal dealing with the nudism movement is equally as synonymous with this as the results of so-called snapshot photography. On the beaches of the Baltic Sea, naked people were an everyday sight and taking photographs, both in the private context but also by professional photographers, too (for example, Klaus Ender), was certainly no exception or something that only happens behind closed doors. The images were published in “Das Magazin” or presented in exhibitions such as “Akt & Landschaft” – Nudity and Landscape – in the mid-70s or, somewhat later, in the publication, “Die nackte Republik.” The unconstrained and unselfconscious dealing with nakedness becomes clear here; on the other hand, though, also the hidden – or to be hidden – desire for more freedom and individuality.