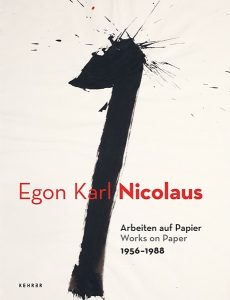 You came over Rue de Seine to the Tournon, where I was sitting on the terrace. Stepping lightly, slim, the ‘Schubert glasses’ struck me the most. Later you let on to me that you didn’t need them, you really liked the shape as it reminded you of Schubert. You sat down next to me, and so we fell into an interesting conversation about painting and art and you introduced yourself to me as a painter.

Many artists, writers, painters, opera singers, whose names we still know today, were frequenting the Tournon back then. Madame Alazar, the proprietor, occasionally helped them out with a baguette or a bit of cash when clients were taking their time paying the artists. Joseph Roth made plentiful use of that in his time.

During our conversation you suddenly said to me: ‘You were born under the star sign Virgo’, which was true and impressed me greatly as I was very interested in astrology. Only later did I find out that Karin, your ex-wife, was born under the same star sign, and you’d probably noticed certain similar characteristics.

On hearing about my interest in art, you suggested a gallery tour and, with time, you introduced me to the Paris art scene. At the weekend, we visited the galleries on the Rive Gauche, on Boulevard St-Germain, the next time, ones on the Rive Droite, Rue du Faubourg Saint-Honoré and then all the corresponding Paris museums. At the Museé d’Art Moderne I commented that Léger’s pictures made me feel queasy. Unmoved, you uttered the reply: ‘Take a good look at them, they show our times.’ I thus became your art student and learned how to see from you.

We moved into a flat together in Montparnasse, third floor, three rooms, one of which was your studio. In Germany it would have been impossible for unmarried couples to rent a flat together, but nobody asked any questions here. Your pictures hung on the walls. Back then you were moving away from the stringent, constructivist period of the verticals towards the Informel that dominated Paris’s galleries. For money reasons and lack of space there were many pictures on paper, stuck to the wall, which were simply replaced when you created a new series.

One summer I visited a friend in Italy and when I came back to Paris I had enthusiastic stories to tell about Florence, the Uffizi and Botticelli. I was thrilled by his picture ‘Allegory of Spring’. Upon which, your question: ‘and these pictures here?’, you pointed at the walls. My reply, ‘Yes, they’re good too, but Botticelli…’. In one swift move you tore all pictures off the walls, slammed the door and I heard your footsteps on the stairs.

Paris remained our place of residence; in Germany, Cologne was added to that. I was asked to build up a subsidiary of the French company I worked for there. Nico found Cologne a very good choice, as after all it wasn’t far from Paris, as he said. He kept his studio in Rue des Grands Augustins. Picasso lived just a few houses away, which Nico saw as a good omen for his creativity. So he commuted back and forth between the two cities. In Cologne he moved into a studio on Brüsseler Platz, where the colourful local life reminded him of Paris.

During this period we experienced a number of wonderful exhibitions in Paris, at the Centre Pompidou, PARIS-BERLIN and PARIS-MOSCOU, which thrilled the international art world. In her gallery in Rue des Beaux Arts, Iris Clert showed the works of the young Yves Klein. Parisians crowded into the little gallery to admire the blue pictures. Paul Facchetti exhibited Nico in his new, big gallery in Rue des St. Pères, which garnered enthusiastic reports in Le Monde and Le Figaro.

At a dinner invitation in Facchetti’s flat we admired recent pictures by Dorothea Tanning, the wife of Max Ernst. For reasons of space she’d also covered the communal hallway with her art.

During my visits in Paris we went – as always – to galleries and museums so that I could keep up to date with art events there. Such visits were also part of our schedule on our holidays in many countries around the world. During a New York trip Nico stayed in the legendary Chelsea artists’ hotel and met many artists there, as well as his old friend Phillip Weichberger. As was the custom there, he paid for his stay with a picture. Many creative and productive years followed, and are highlighted in this book.

Nico died in 1988, just 60 years old. He, who loved life, would’ve loved to have been part of life for longer. But in the end, he was able to say with satisfaction: ‘I lived my life.’