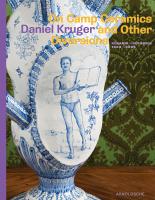 Ceramic can be the principal feature, but it can be incidental too. Even when it occupies the heart of a museum, park or table, a vessel can be ornament, sculpture, or simply a focus of attention. If we have the modern era begin with the 18th century Enlightenment, then modernity discovered ceramic and reflection at the same time. This is because ceramic produces objects, but also artworks. Accordingly, reflection is thinking, but also imagination. Or reflection finds remote meanings precisely in what is closest, in the plates off which we eat, for example.

On sheets that, according to a commentary on an edition of Novalis’s works, bear the watermark of a vase, the poet wrote an essay about Goethe in 1798. He begins by comparing Goethe with an industrialist: ‘He did in German literature what Wedgwood did in the English world of art.’  To Goethe, who found it dubious that Wedgwood circulated sculpture and painting in the form of ceramics, this comparison would have been rather* dubious. And, certainly, Novalis is writing not only about but also against Goethe, especially when he ascribes to him the propensity ‘to bring something insignificant to completion, to endow it with the utmost polish and ease, rather than to begin a world.’ Novalis seeks this world in the future, and therefore, in Goethe, he finds it only in the past, in Antiquity. But the reflection that prompts Novalis to begin comparing literature and industry terminates in the realisation that even Antiquity begins anew: ‘For one is much mistaken when one believes that antiques exist. Only then does Antiquity begin to arise. It comes into being beneath the eyes and in the soul of the artist.’

Every ceramic by Daniel Kruger can be related to Antiquity. In 1993, the artist himself says: ‘What I found interesting as a notion was the way classic models were repeatedly being copied and look different again and again. The way they reflect the time in which they were produced, despite efforts to reproduce the time from which they were taken. The ancient shapes and patterns become a support for new ideas.’ Even when Daniel Kruger affixes cars or fighter planes to vases, or uses stones, balls and bones in centrepieces, there are still threads, such as Roman iconography or Baroque allegory, which tie the modern with the ancient age. And even when vases and occasional tables strike tones that are familiar from China or Africa, these tones resound in the Mediterranean region of Europe.

Those expecting eternal youth will see Daniel Kruger’s spontaneous and voluptuous modelling frozen in these ceramic still lifes.** But allegorical expression is not just visual expression; it is an alternative expressive form above all. This can mean having Antiquity recreated in something other than an energetic Renaissance image. In one centrepiece one finds a football, around which stones are placed in a dish (see p. 210). Alternatively, the stones are vaulted by the football’s sphere, like incidental cupolas of a principal cupola. Daniel Kruger’s early services are similarly centred and arranged. In seemingly endless variation, the same shape can be found in Daniel Kruger’s jewellery too.

*I had ‘properly dubious’ (… wäre dieser Vergleich erst recht bedenklich). It all hinges on the repeated ‘dubious’